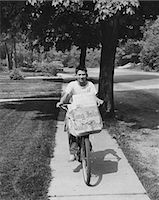 It’s 5:00 AM on a very typical winter morning in the prairie; bone-breaking cold with frost, ice, or snow (more often than not, all three) covering everything in sight.  Even the air seems to be solidified with ice.  The ever-present prairie wind is biting into my exposed face while simultaneously shaking the icicles off the now bare pecan trees which, like bombs dropped by some unseen aircraft, crash onto the corrugated steel roof of the barn/garage creating a sound I’m occasionally reminded of as cars slam into one another at a busy intersection; minus the screeching tires.

Like stalagmites and stalactites joined over centuries of undisturbed formation, icicles are hanging from the eves of the house; or are they standing from the ground?  I can no longer tell, for they form an almost prison-like cell around the porch caging me in until I’m ready to “break free” for the first of two daily routines; my part in the promulgation of news.

I firmly believe the inventor of the Frisbee was once a kid with a paper route.  Those of us old enough to remember this routine can recall the simple, but well respected skill of folding a newspaper into a square and sailing them through the air from the street without so much as a break in peddling (unless of course your bicycle, like mine, was possessed), AND skillfully landing it on the porch, next to the door, on the opening side so the customer need but open the door for two seconds to retrieve the paper.

All this without hitting the door or house to avoid waking the customer.

Siting amongst several bundles of newspapers dropped by the “spotter truck,” earlier in the morning at the end of the long, dirt driveway, I’m using one bundle as a temporary chair (the first time is most certainly the last time one sits for longer than thirty seconds on a surface exposed to winter conditions in the prairie).  I’m rapidly folding each copy of the morning news, the “Shawnee News Star” and stuffing them into tight, organized rows inside the canvas satchels which hung on each side of my daily nemesis – the demonic Schwinn bicycle with nut-cracker bearings.

Oh how I would have loved to see that damned bicycle crushed, melted and left to rust in some long-forgotten junk yard.  Or better yet, throw it onto one of the busy RR tracks in Shawnee and watch with utter satisfaction as it received its just rewards; over and over again.

More fifty years later, it’s oddly contemptible to see some lunatic in a car swerving through the neighborhood at speeds even the Nevada Highway Patrol would take issue with on the freeway.  For the safety of my dogs, I don’t leave my backyard until this moron has made the loop through the neighborhood; like someone who has been on an all night binge, he/she carpet bombs the neighborhood, depositing massive bundles of “newspapers” wherever they may fall.

If the reader is fortunate, the paper is at least in the same neighborhood as their house, but he/she must retrieve it from the neighbor’s yard, from under the car, or even from atop the car.

Like the paperboys of the 1950’s, 60’s and earlier, printed news is on the brink of extinction.  Some will blame everything from gossip to technology.  “Some Newspapers are unequivocal in pointing the fingers of blame at the Internet, as if it were a vampire wolf gobbling precious advertising revenue.”

As is often the case in human nature, people point fingers at symptoms rather than the cause and a loss in ad revenue is just that; another symptom.

Once a true art; unbiased, unabashed and sincerely concerned in informing the public at all costs, printed media was a trusted companion for anyone with a driveway or within walking distance to a news stand.  Just as the airwave artists of a long gone era, John Cameron Swayze, David Brinkley, Chet Huntley, Walter Cronkite, and the king of media, Edward R Murrow, printed media likewise earned admiration, respect and dedicated readers amongst the world.

But that was then.  And this is now; wherein I see two major afflictions killing off the media outlets:

Regardless of what we see in the self-serving media, there are no other problems, two simple solutions, and, it doesn’t take a grossly overpaid, under-achieving executive to see the problem and to correct the issue.

The correlation between the paperboy/the early-morning lunatics and news then/now is obvious and impossible to ignore.  Quality is always better than high-speed, sloppy volume; bullshit is bullshit – it stinks and our media outlets are packed full of bullshit.  Nobody wants to deal with it, and certainly; nobody wants to pay for it.

Unlike T-Rex which had little to say about its extinction, printed and even airwave media outlets are rabidly seeking their own demise with short-sighted, delusional, profit-oriented goals.  If they find themselves extinct, there will be nobody to point the fingers at but themselves.

Perhaps T-Rex and the US media outlets have more in common than extinction – they’re both nothing more than overgrown chickens pecking away at the little stuff while the important stuff, the stuff we readers truly wish to read and with which to keep ourselves informed. 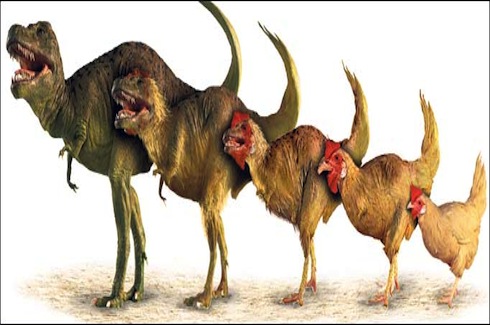