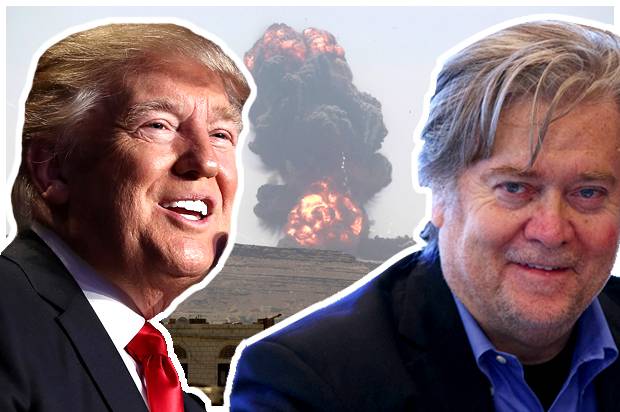 As an adult, I’ve made a habit of always questioning my own convictions. Introspection is vital to mental health and in evaluating one’s own decisions.  Ignoring the potential that your thought processes may be flawed hinders personal growth; it can also be dangerous as an adult, for making decisions based upon faulty perspectives almost always ends in faulty outcomes.

It’s a constant internal struggle I deal with, an endless process I can’t turn off.  I even find myself wondering if my endless introspection is itself an unhealthy obsession.

But as I watch this new so-called “president” I cannot find one reasonable alternative with which to argue against my current perspective, for every time I give him the benefit that he and I may simply have a difference of opinion, I hear him speak; I see his words; I see what he’s doing to the very foundation of our nation.

And it all brings me right back to the same conclusion.

In simple terms; he’s a repugnant, delusional, self-absorbed, ignorant, human being who has no business sitting in the chair he’s in.

Any person who wanders into the CIA, desecrating the very hall they view as hallowed beyond holiness and says; “I know you all voted for me, but I’m not going to ask for a show of hands”

Then again, this very day, he repeated the same words, this time in a room full of military personnel; people who are required to obey his orders; people who die at his command.  To hear it once is disgusting; twice is absolutely repulsive and unconscionable, especially among those with whom he’s speaking.

Oh, he tries to make it appear that he’s joking with them, but he is not joking, he’s deadly serious and he’s piss-poor at hiding his phony-ass “humor”.

He is completely and hopelessly obsessed that someone, even one person, in this country didn’t vote for him.  Although he’s sitting in the chair he sought, he’s still so completely preoccupied with the thought that someone out there had the misplaced balls to vote for someone other than he.  So much so, in fact, that he’s signed yet another unread decree to begin an investigation**, a very expensive investigation, into fraudulent voting.  Three million frauds need to have their voting privileges removed.  Hell; who knows?  Maybe they’ll be his first prisoners at the renewed Gitmo, or one of the other black sites he’s reopening.

Was it you?  Yes; I am most certainly one of those who derailed the ego of a man who shouldn’t even be outside a mental institution, much less sitting in the office he now occupies.  I know I’m unrepentant in this, but; who else, I ask, would have such unmitigated, spineless gall to vote for someone other than Trump??  How can we, the three million plus (he so damned stupid, he hasn’t even considered the fact that there are far more than just the three million of us) even live with ourselves, whomever the rest of you are?

For the shame of it all!!

** He’s really very good at spending other people’s money – it’s precisely how he became a billionaire, ripping people off and filing bankruptcy until he accumulated everyone else’s money.

This, his past behavior, his never-ending tirades against any who hold a different view than; “Trump is the light, the truth and the reality of all things” clearly, indisputably is all the proof one should need to come to the same conclusion I have.

For, everything that so much as implies differently; the “dishonest media; The fake negative polls; the laws of this nation are wrong; all things true must come from him and only him, for he is the only purveyor of truth, the light of lights.

The judges, especially that one, you know, the one in California that misinterpreted his intent.  After all, he’s not a bigot; how dare they even suggest such a thing?  Judges are all corrupt and shouldn’t be trusted, especially when they interfere with the almighty’s view.

The government agencies who gather data, REAL data, are useless liars and do nothing but promulgate hoaxes. The EPA is full of lying scientists.

The Department of Interior and National Parks Services employees can no longer speak their minds, for they don’t speak the truth, the whole truth and nothing but the Trump truth either.

Somehow, in just two weeks, he’s turned the entire economy around and has saved hundreds of thousand of jobs, hell; maybe millions for all we know – all because the Trump Almighty is now holding court in the Oval Office and issuing decree after decree to right all the horrific wrongs perpetrated against those who did truly vote for him.

Obama was lying about the jobless numbers, numbers that, in truth (his truth), were in fact 42%, numbers that through some Trump-inspired miracle, in the span of two weeks, have dropped from 42% to 4.7%.  My god!!  He is indeed the miracle-worker.  If you don’t believe it, just ask him.

After all this, I ask but one simple question.  A question anyone could answer, IF they don’t have their eyes and ears shut down; IF they aren’t afraid to see the reality, that this guy, who is truly just a moment away from nuking the entire planet, not if, but WHEN he finds there is someone out there who is not subscribing to the Trump Truth.  The simple question is; how can any human being with even just one brain cell still functioning not agree that this guy is mentally unstable and needs to be removed from office before he creates a real truth – there is no more democracy in the United States?

Or even worse – there is no more planet Earth, for the lunatic pushed the button because he got mad at some lying scientist, government employee, media outlet, judge, pollster, CIA agent, or one of us fraudulent voters who saw through his shallow charade the day he opened his mouth.

Hell; I’m kind of wondering; when’s he gonna replace the god he professes to believe in?